Recent fieldwork in the New Kingdom town, both at SAV1 East and SAV1 West, has added new data to our assessment that a very complex community of Egyptians and Nubians have been living on Sai Island during the 18th Dynasty. However, it remains too early providing conclusive answers to the crucial questions who were the inhabitants of Sai in the New Kingdom era.

In the forthcoming years, a detailed comparison between the material found in the town and in the cemeteries will be undertaken – see already an earlier post.

For this purpose we just resumed work in the large New Kingdom cemetery SAC 5. This pyramid cemetery is probably the most important Egyptian cemetery of the island and was discovered in the season 1972-73. It lies approx. 800 m south of the Pharaonic town and was party excavated by the French mission, recently published as a substantial monograph in two volumes (Minault-Gout/Thill 2012). Similar to other Nubian sites like Aniba, Amara West and Tombos, Pharaonic-style tombs have been built at SAC5. This cemetery is of major importance because it was in use for a long period of time, covering the New Kingdom as well as the Pre-Napatan period (the so called Third Intermediate Period in Egypt). Its rock-cut tombs with mud-brick chapels and mostly pyramidal superstructures find close parallels at Aniba, Soleb and Amara West but also in Egypt, e.g. in the Theban necropolis. 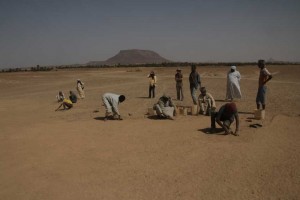 I am very happy that we finally resumed work at this important site – we have chosen the southern part of the cemetery for our new investigation. We are currently cleaning the surface – of course hoping that we’ll soon have information whether this part of SAC5 still holds tombs to be excavated or not… As yet, the finds are still limited and range in date from the Neolithic period to the Ottoman and sub-recent era! However, some of the sherds are clearly mid-late 18th Dynasty in date – very promising.

I am especially grateful that our work is undertaken in close cooperation with our French colleagues – Florence Thill, the former excavator of SAC5, will join us next week. Hopefully just in time for some exiting new discoveries!