Having just started week 4 of the 2017 fieldwork season, it’s time to briefly summarize the last week of work in Tomb 26 and in SAV1 West.

In Tomb 26, lots of things changed… The trench in front of the lower burial chamber still keeps us busy – we finally have now an almost complete skeleton still in place. But we still don’t know how much deeper the trench continues. The silt filling is partly void of finds, partly full of bones and also includes some pottery sherds. 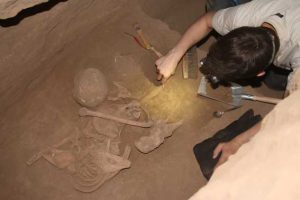 A big surprise waited for us in the northwestern corner of the main chamber. I started cleaning there at the very beginning of this season. Already in 2016, a feature in this corner was described as “niche” – obviously a small opening into the western wall, with collapsed stones making an assessment of its size difficult. Well – this small niche is now another chamber, measuring ca. 3.3×3.4m – and actually a “hidden chamber”! Cleaning the entrance area and removing all the collapsed stone from the roof, it became clear that the worked stones lining the western wall of the main chamber hide the second chamber situated further west! Since all was once plastered, the new chamber was once obviously nicely concealed. 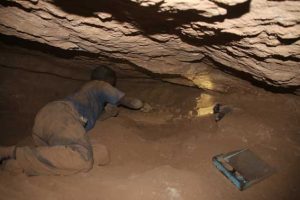 Cleaning the new chamber was hard work – it was filled until the top with dense flood levels.

We have almost finished removing the debris, having reached more flood levels with some bones and pottery – at present, it seems that only little remains of burials have survived – however, for the ground plan and general understanding of Tomb 26, this is all very exciting! And we can say already that this new chamber was also plastered – remains were found on the collapsed roof and on one part where we have reached the chamber floor.

Work in SAV1 West is also progressing were well – we managed to finish excavating the extension to Square 1SE to the east which was necessary because of the new cellar found in week 2. Only little in situ mud brick structures have survived – but we will be able to put together ground plans of some nice domestic structures. Besides the cellar, a storage pit and a possible grind stone emplacement were found.

Registration of finds is continuing – our favorite piece of week 3 was a tiny miniature net-weight! Its small size becomes very evident when compared side by side with an axe-head shaped net-weight of regular size. 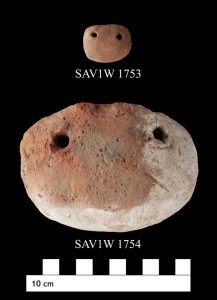 Furthermore, to round up a very productive week with lots of new finds, we had a perfect Friday trip to Kawa and a wonderful tour by Derek Welsby through town and cemetery – the warm welcome by our British colleagues was very much appreciated!

Last, but definitely not least, I am more than happy that my dear friend and distinguished Viennese colleague Helmut Satzinger joined us yesterday. Timing could not be better: we had the possibility to celebrate today his birthday with a small boat trip – unfortunately without seeing crocodiles, but with plenty of nimiti ;-)!