The last days were quite busy with ongoing work in Tomb 26. The first task after checking out the new chamber on the lower level, was to clean the northwestern corner of the main chamber. Dense flood levels were covering the floor of the chamber in this area, holding almost no finds, but covering some bone fragments. On an upper level, already excavated in 2016, an almost intact individuum has been found. 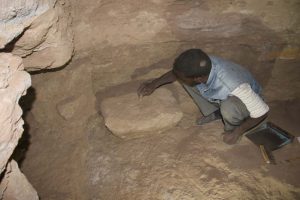 One of the particularly interesting features of Tomb 26 is that the southern and western walls were once lined with worked stones and plastered – a collapsed block from this casing was located in the northwestern corner. We will take it out later in this season, hoping to replace it virtually back on the wall by checking the negative voids in the nearby western wall with the block’s dimensions.

The second task, especially in order to allow excavation of the new chamber located below the northern wall, was to trace the western part of the trench along the north wall. This trench was only excavated on its eastern part in 2016 – clearly showing that it once gave access to the lower chamber, but was completely filled with flood levels.

We successfully found the trench on the western side and are currently busy excavating it layer to layer. Like in 2016, a substantial amount of bones and pottery vessels were found – hopefully the ceramics will allow us to date the filling of this access to Tomb 26’s lower chamber. 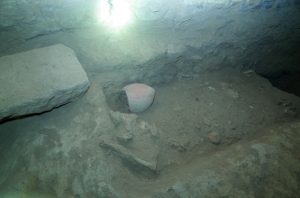 The western part of the trench along the north wall.