Amazing how time flies by during a fieldwork season – we arrived at Sai one week ago, finished our first week with workmen yesterday. On Wednesday, Cajetan Geiger and Andrea Stadlmayr joined us – Cajetan will be supervising fieldwork starting next week at sector SAV1 West (together with Franziska Lehmann) and Andrea, one of the project’s physical anthropologists, is of course working with me in Tomb 26.

The results of the first week are very satisfying: on arrival, we found Tomb 26 undisturbed, successfully cleaned our re-filling of its shaft and made a first check of the lower, still unexcavated burial chamber. The entrance of this lower chamber was still largely concealed by the trench along the north wall which we did not excavate on its western side in 2016. 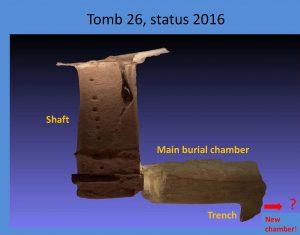 Starting with cleaning the northwestern corner of the main burial chamber, we soon were able to trace the outline of this trench, locating its western edge. Excavating the trench was quite a challenge, as many dislocated human bones had to be cleaned and properly documented. 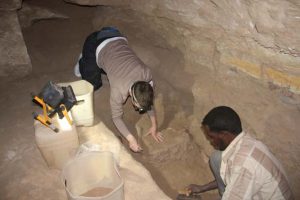 Andrea and Mohammed busy working in the trench along the north wall.

Like last year, we are using SFM documentation for every single surface in order to reconstruct the formation processes within the tomb in detail. Loads of thanks go here to Martin Fera – thanks to his perfect setup in the last seasons and his detailed introduction, the documentation works very well – my photos are not yet as perfect as Martin’s, but it definitly works ;-).

The layers within the trench are mostly flood deposits as well as some collapse from the northern wall and debris. Quite substantial amounts of ceramics were found, all of which are New Kingdom in date. 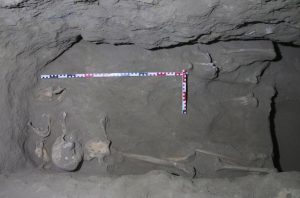 Dislocated remains of burials in the trench; note the upper edge of the chamber entrance on the north wall.

Yesterday, we were able to trace the western upper edge of the entrance into the lower chamber! This entrance has quite impressive dimensions being extremly wide and we are much looking forward to clean it further and start excavating the chamber itself in the next days, insha’allah.