AcrossBorders’ 2016 mission on Sai Island has just ended after 10 fruitful weeks of excavations and lab work. Excavations were carried out in three areas in the Pharaonic town (SAV1 East, SAV1 West and SAV1 Northeast) and in the New Kingdom cemetery SAC 5.

At SAV1 West, the eastern extension to Square 1S in SAV1 West, labelled as Square 1SE, yielded several small mud brick buildings. Feature 123, extending into Sq. 1S, was completely exposed and was of great interest. Its layout is different from the other structure along the “wall street” and an infant burial came up in its westernmost compartment – probably from a later phase of use, most probable the Christian period. Like proposed in 2015, the earliest phase of occupation at SAV1 West seems to be contemporaneous to the building of the town wall and dates to the mid-18th Dynasty. There is clear evidence for several phases of use within the 18th Dynasty.

At SAV1 East, extensions were added towards the western and southern part of the site (new Squares 4B, 4C and 4B1). Within Square 4, the western part of feature 15, our beloved large subterranean room lined with red bricks, was fully excavated. 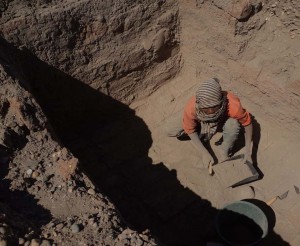 Pottery and seal impressions found below the wall 44 of Building A set into this cellar proof the dating of the corresponding building phase to the later reign of Thutmose III. Extensions in the new Squares 4B, 4C and 4B1 yielded in situ remains of large mud brick magazines with schist pavements. Several building phases within the 18th Dynasty could be traced, especially of the early and mid-18th Dynasty. All in all, further proof was gathered that sector SAV1 East has much in common and shows many parallels to the southern area of the town, SAV1, excavated by M. Azim in the 1970ties.

To test the assumption that the eastern part of the New Kingdom enclosure wall was running along the sandstone cliff, a 15 x 3 m trench was excavated to the east of the site SAV1 North (called Trench 1 of SAV1 Northeast). Remains of brickwork associated with mid-18th Dynasty pottery can be interpreted as the town enclosure wall and enable us to calculate the Pharaonic town’s exact east-west width. 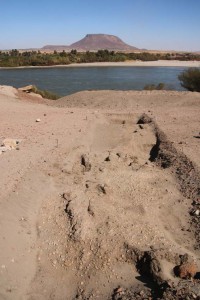 The test trench in SAV1Northeast with scarce remains of New Kingdom mud bricks.

In addition to the excavation, kite photography of the Pharaonic town and the cemetery was conducted. 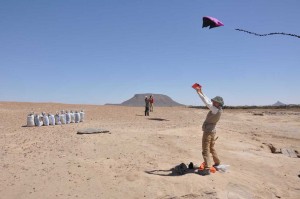 One of the days where the wind was strong enough for Martin and his kite!

A geoarchaeological survey in the vicinity of the New Kingdom town site and to the south of Gebel Abri was successfully undertaken (January 30 to February 19). This survey took the form of hand auger profiles, as well as opportunistic prospection of exposed and available sections and quarry outcrops. Furthermore, the micromorphological sampling programme was continued, focusing on the 18th Dynasty occupation in SAV1 East, but also testing some deposits in SAV1 West.

Both pottery and objects were processed in 2016, documented by photos and drawings and described in the Filemaker database with currently more than 4600 entries. The focus was on the new material from SAV1 East and SAV1 West ‒ over 400 finds have been registered and photographed. One of the numerous highlights is a scarab (SAV1E 1595) from the floor of a newly exposed room towards the west of Building A.

Large amounts of the newly excavated pottery were processed in sherd yards at the sites (430 baskets from SAV1West, 615 baskets from SAV1 East). A substantial amount of pottery sherds were documented by drawing – the focus was here – due to publication responsibilities – on SAV1 North. 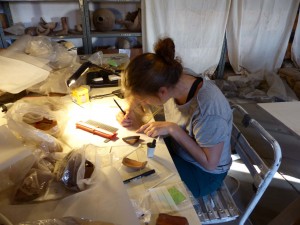 Work also continued in 2016 in the large New Kingdom cemetery SAC 5 (February 13 to March 11) in Area 2, focusing on tomb 26 discovered in 2015. This tomb was found looted at the beginning of the season – the backfilling of the shafts were taken out during May 2015, the burial chamber was entered and some deposit along the south wall towards the east of the chamber was removed, but the damage was not severe. Excavation work focused on the cleaning of the deposit in the burial chamber (feature 2) – a minimum of 10 individuals were documented from different levels reflecting the long time-span of use of the tomb from the mid/late 18th Dynasty to the Napatan era, comprising Ramesside and Pre-Napatan burials. The burial chamber was completely excavated and emptied. 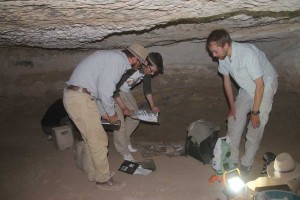 In a large part of area 2 towards the south and east of tomb 26, a complete surface cleaning was conducted, providing proof that this sector of the cemetery is void of tombs, possibly stressing an elaborate position and the high importance of tomb 26. 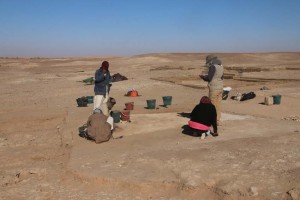 Work in the surroundings of tomb 26.

All in all, the new information provided by the latest, very sucessful field season of AcrossBorders will allow us to 1) contextualise further the setting of the Pharaonic town within the landscape during New Kingdom times; 2) elaborate the city map of the Pharaonic town; 3) improve the stratigraphic sequence in all sectors; 4) connect the findings in the town with fresh evidence from the cemetery SAC5.