Hello, it’s me. I was wondering if after all these DIGS you’d like to meet…

Oliver Frank Stephan, Master of Arts in Egyptology with a thesis that dealt with wooden face fragments of (mostly) Late Period coffin-lids from the Egyptian Museum (Georg Steindorff) of Leipzig University. After finishing my masters in Leipzig, I quickly decided to take part in Julia Budka’s AcrossBorders project…

So hello from the other side… introducing myself after one fruitful year, looking back at four excavations in Egypt and Sudan: a huge amount of drawn pottery, a lot of experience and some new perspectives.

I had my first season on Elephantine for seven weeks from 18 October to 06 December 2014. My task was to draw pottery sherds and complete vessels from House 55. The current excavation of this intriguing building conducted by Cornelius von Pilgrim allows a very detailed analysis of material dating to the early and mid-18th Dynasty. Here the focus is on a functional analysis of the ceramics found at Elephantine as an important settlement in southern Egypt, at the border to Nubia. AcrossBorders is joining Cornelius von Pilgrim’s ongoing work on Elephantine, with Julia focusing her research also on the relations with Egyptian settlements in Nubia, especially Sai Island.

Before I joined Julia’s project, I worked with New Kingdom pottery and Old Kingdom stone vessels at Leipzig University for the first time. My first season on Elephantine showed me the broad variety of pottery: big and small dishes, bowls of different sizes, squat jars, cups, pilgrim flasks, beakers, flower pots, amphoras, zirs, beer jars, baking dishes, bread moulds and many more. Some of those were really challenging but with much practice I can now deal with all of those types of pottery.

For me, the most interesting thing about pottery is not only their shapes or use, but also the details of the production process. While drawing pottery you develop an understanding of their creation and it’s quite special to see that you can put your own fingers in ancient fingerprints which the potters left on the vessels. With every fingerprint I get more excited to get additional information out of these „pots“.

After my first experiences in drawing and understanding early New Kingdom pottery I planned to go to Sudan from 12 February till 15 March 2015. On Sai Island I noticed many similarities to the Elephantine material and got even more confident in dealing with pottery, seeing the importance of how easy it can be to date with the analysis of pottery (cf. Budka, J., “The early New Kingdom at Sai Island: Preliminary results based on the pottery analysis (4th Season 2010),” Sudan & Nubia 15, 2011, 23-33). Those who are following this blog already know about Feature 15 from Sai Island. From here, there was a huge quantity of complete and almost complete vessels which I drew during four weeks in Sudan.

As you can see, it’s hard to stop your interest in pottery, so I decided to assist Julia for another four weeks in Luxor with the South Asasif Conservation Project (SACP) by Elena Pischikova. The main task was to draw most of the complete vessels from TT 391 of Karabasken, which came from Area I (the courtyard of TT 391) and Room IA (a burial chamber in the north wall of the courtyard) while Julia was processing and analysing the diagnostic sherds for the database (cf. Budka, J., Pottery from the tomb of Karakhamun, in Tombs of the South Asasif Necropolis, Thebes. Karakhamun (TT 223) and Karabasken (TT 391) in the Twenty-fifth Dynasty, ed. by Elena Pischikova, Cairo 2014, 247–262). To sum up this site, I’d like to give a short overview of the vessel types I worked with: conical beakers, pot stands, large storage vessels, small two handled cooking pots, oil jars containing a black and oily substance and goldfish bowls. Most of this material is dating to Ptolemaic period and it is an excellent experience to work in a funerary context, as well as a different time period (but you will hear more about this from me later…).

Now I am again on Elephantine, working on New Kingdom pottery, with exciting shapes and types of vessels. Work started 26 October and will end 5 December. There are a few days of work left and I surely will enjoy every minute dealing with my special friends. 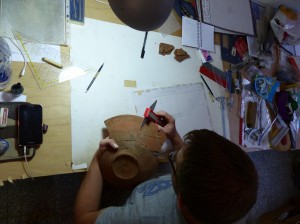 My enthusiasm and my will to get more into pottery and dating with it is now at an all-time high. I am looking forward to upcoming seasons here on Elephantine, Sai and Asasif. That’s why I can happily announce that I will move to Munich at the end of January 2016 to extend my knowledge of the intricacies of pottery.