In January, during the 2014 field season, together with Huda Magzoub – our inspector of NCAM – and Erich Draganits – the geologist of the project – we went for a one-day excursion to the pottery workshop in Abri (1). Our purpose was to interview the two modern potters working there and collecting information concerning the manufacturing sequence of the vessels they produce for the people of the village and surroundings.
http://www.airmaxfreedom.com air max tn
Talking with them, we learned they produce every year many kinds of vessels (i.e. large jars for storing the water, cooking pots and vessels for milk production), following a traditional recipe. This recipe,however,will vary according to the specific function and performance of use of the respective vessels.

They explained to us, for example, that for the zir (water storage vessel) they prefer to use  as the raw material a soil collected in the inland, far from the river banks: this soil is less hard and compact compared to the proper Nile silt and therefore more suitable for the production of such large vessels that have to be porous and also light in order to be movable.
http://www.airmaxfreedom.com air max 90s
In addition, the modern potters seem partially to differentiate also the tempers they add to the clay: they select intentionally the dung from goat or sheep for the small pots, while the one from donkey is preferable for making larger vessels.

The variables in terms of clayey raw material and tempers we observed in the nowadays pottery production at Abri may explain some minor technological differences we also notice in our New Kingdom assemblage from Sai Island and especially in the organic-rich Nubian fabrics.
ray ban wayfarer sizes
Three full days (26/06-28/06) of experimental archaeology at the “MAMUZ” open-air Museum in Asparn (Lower Austria), organized thanks to the kind cooperation of our colleagues from the University of Vienna (especially the archaeologists and prehistorians responsible for the experimental archaeology class: among others Stefan Eichert, Mathias Mehofer and Hans Reschreiter – the latter with the initial idea for us to join!), were the perfect occasion to test our ideas and impressions, playing a bit with clay and tempers in order to experiment by ourselves the ancient pottery recipes!

One of our experimental projects in Asparn (the other one concentrated on fire dogs and their possible function) was dedicated to the production of small clay test tablets (c. 9 x 9 cm) using different kind of clay and tempers we collected in situ at Sai Island.

As a raw material, we employed two different samples of clay (labelled clay “type A” and “type B”) collected at different locations of the island. As a tempers we used: sand, caliche, charcoal and dung from goat, cow and donkey from Sai Island plus a sample of horse dung from Austria.
http://www.newbalanceshoesinc.com new balance womens 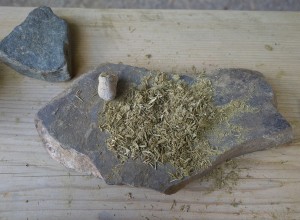 Preparing the temper – dung from donkey.

We prepared the test tablets following an accurate protocol, taking notes of all the relevant scientific steps: from the preparation of the clayey raw material and tempers (STEP 1) to the production/forming of the tablets (STEP 2) and then to the drying (STEP 3) and the firing (STEP 4) phases.
http://www.airmaxfreedom.com air max 180 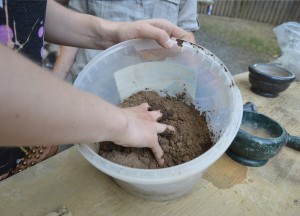 Mixing the clay with water. 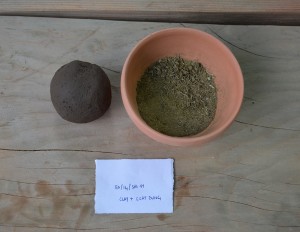 Clay type A and dung from goat. 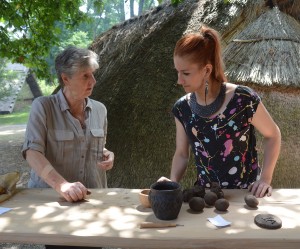 Vera and Nicole forming the tablets.

The tablets were weighted during the production and then after the drying and the firing to check how much water they lost. 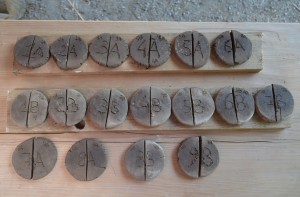 Our next step will consist in analyzing them by iNAA and also in preparing thin sections to be studied under the microscope!

Looking forward for the results, we already learned a lot from this experience and had so much fun working together!

Many thanks go first of all again to our colleagues and to all students of the experimental archaeology class of the University of Vienna, to Vera and Ludwig Albustin who have been of invaluable help in preparing the clay and much more! Thanks also to the AcrossBorders’ team: Julia Budka, Nicole Mosiniak, Jördis Vieth and Arvi Korhonen. We did a great team job, sharing for three days the joys and also the pains of being potters! 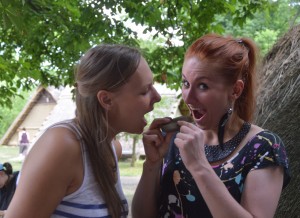 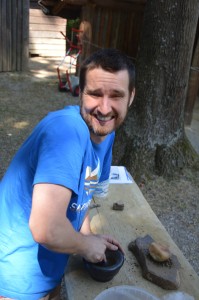 The hard life of a potter…

1 thought on “From Abri, Sudan to Asparn, Austria: experimenting with ancient recipes for making pottery”