Giving a lecture about Sai in Hamburg last week, I had not only the pleasure to meet dear colleagues and friends there (and to have a great Abydos-Berlin-reunion!), but also to spend some time thinking about feature 15.

Feature 15 is definitely the highlight of AcrossBorders’ excavations in SAV1 East and has kept us busy ever since 2013. The large subterranean room (5.6 x 2.2 x 1.2m) was dug into the natural gravel deposit and lined with red bricks. Its filling deposit was very rich in archaeological material: large amounts of charcoal, hundreds of dom-palm fruits, abundant animal bones, c. 100 almost intact ceramic vessels and more than 200 clay sealings. The sealings comprise a large number of royal names (Amenhotep I, Hatshepsut and Thutmose III), a seal of the viceroy Nehi and various floral decorations in a style typical for the Second Intermediate Period. 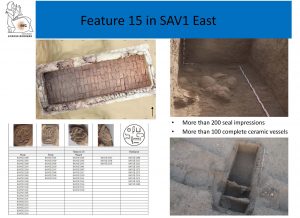 Thanks to the stratigraphic sequence, several phases of use can be reconstructed for feature 15. A dating of these building phases was already proposed in 2015, based on the clay sealings and the ceramics (Budka 2015) – the stages show an interesting correspondence with the building phases of Temple A and its surroundings. Most importantly, a section of wall 44, the western boundary wall of the courtyard of Building A, is set into feature 15, thus definitely later in date and sitting on top of the lowermost deposit of feature 15.

It was therefore clear that feature 15 was already in place before one of the main walls of the courtyard of Building A, wall 44, was built. Only this season in 2016, we removed wall 44 and excavated the deposit below it, exposing the westernmost part of feature 15.

The deposit corresponded to the lower filling of feature 15 east of wall 44. Several fragments of pottery and a clay sealing are especially significant. The small fragment of a mud sealing (SAV1E 203) shows a stamp which contains the name of Mn-xpr-ra (Thutmose III), written vertically and without a cartouche, with a nbw-sign beneath. Two uaeri extend downwards from the disc and face the exterior sides of the stamp. The top of the stamp is not preserved. 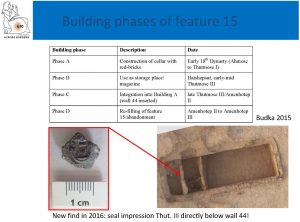 The results from the 2016 season therefore nicely support the reconstruction of the building phases from 2015 ‒ Building A was extended in the later phase of the reign of Thutmose III (maybe even under Amenhotep II) and wall 44 was set into feature 15 at this stage.

The study of the complete set of finds discovered in feature 15, currently underway, will contribute to the functional analysis of SAV1 East in general and Building A in particular.