Approaching the end of our fieldwork, we are currently focusing on measuring 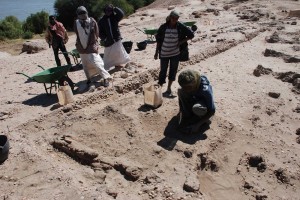 and mapping the excavated northern part of Building A. As stated earlier, on its eastern side and here at its north-eastern corner, the northern wall running East-West continues towards the Nile.

We have by now removed part of the debris covering this area, comprising of decayed mud bricks, mud mixed with plant remains and very diverse pot sherds, mostly of the Christian and 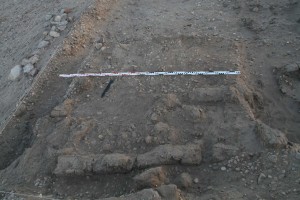 Ottoman period. The complete thickness of the wall is visible, with several bricks still in place, confirming our negative evidence of the robbed wall trench further to the West. At least two layers are preserved and a third layer is partly recognisable. Cleaning of the Northeast corner is time-consuming and not yet finished – assessing the Northeast corner of Building A is thus still on-going and will continue tomorrow. 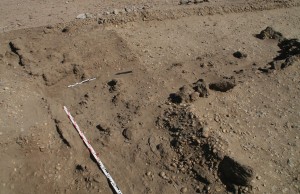