During this week, we made good progress at both sites currently under investigation of the Pharaonic town of Sai, at SAV1 West and SAV1 East. 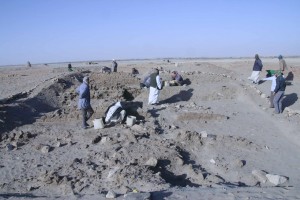 The brick work at SAV1 West was cleaned of the loose debris – we now have the substantial remains of the New Kingdom fortification exposed. The subsidiary, secondary adjacent wall was also found as proceeding further towards the North – as was the so-called “front wall”. Of the latter, we just cleaned today debris towards the west – the dismantled mud bricks are presumably lying on the natural slope of the western edge of the town; giving us much hope that we will be able to clarify its date and phases of use in the upcoming week! 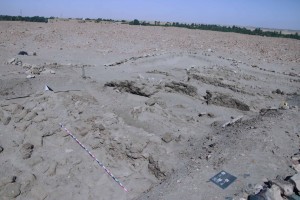 Overview of SAV1 West; view towards Northeast. Debris at top of western slope in foreground.

I am especially excited about work at SAV1 East – we were aiming to clarify the western extension of our Building A, a possible large administrative building of Thutmoside date. 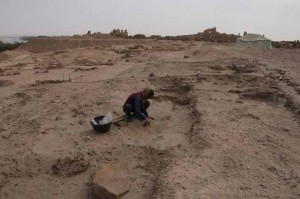 In the last days, Jördis worked with her team in the very difficult deposit of Square 3: within backfilling of late pits and disturbances, they were able to trace the foundations of a very large mud brick wall! Its alignment matches our East wall of Building A’s courtyard – and it is in line with the main North-South street of the town, running from the Southern gate, the Governor’s residence and Temple A towards our area SAV1 East. 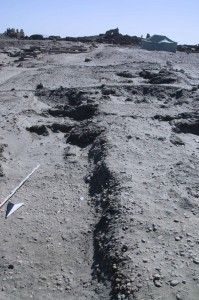 Despite the pitting, we do have traces of the floor levels preserved and some smaller East-West walls, possibly of entrance rooms similar to the ones in the Governor’s residence SAF2. The challenge will be to reconstruct the complete outline of our building from these largely destroyed and dismanteled remains! 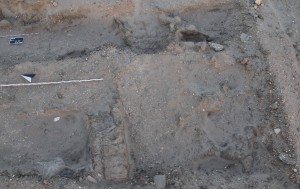 Overview of western part of Square 3, 30/01/2014: the main North-South wall, remains of pavements and a smaller East-West wall.

As yet, both the New Kingdom ceramics from SAV1 West and SAV1 East associated with our mud brick structures do not predate the reign of Thutmose III – stressing that we are currently working in areas which belong to the main building phase of the Upper Nubian temple town at Sai which flourished during the time of Thutmose III and Amenhotep II.

One thought on “End of week 4 of fieldwork at Sai Island, New Kingdom Town”