Among the interesting finds associated with the southernmost burial in Chamber 5 of Tomb 26 on Sai Island are four miniature jars. The burial was placed in a wooden coffin, had a funerary mask and many flakes of gold foil were discovered in the area of the upper body. In addition to the steatite scarab found at the left hand, an uninscribed heart scarab was found directly between the ribs, thus it was placed on the breast of the deceased.

More items of typical Egyptian New Kingdom burial equipment are the four small ceramic jars which were found close to the skull. 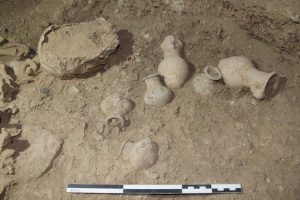 The four small, globular jars as they were found in situ.

These jars are clearly miniature canopic jars – their lids were found a few centimeters apart from the jars, buried between the debris from the collapsed ceiling. All lids show human heads and are also made in clay. Interestingly, the jars were made in Egyptian Marl clay and imitate with their coated surface stone vessels. Miniature canopic jars were also documented in several tombs of SAC5 excavated by the French mission – but none of them is the same type of vessel and the lids are also markedly different (see A. Minault-Gout/F. Thill, Saï II. Le cimetière des tombes hypogées du Nouvel Empire (SAC5), Fouilles de l’Institut français d’archéologie orientale du Caire 69, Cairo 2012, Pls. 90 and 131). 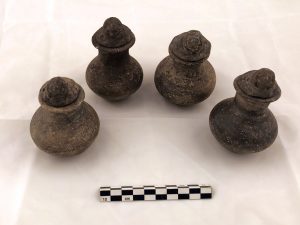 Miniature canopic jars united with their lids today in Khartoum.

Today, we finished the photographic documentation of this interesting and so far unique set of 18th Dynasty miniature canopic jars from Sai, drawings will be produced in the next days – another step done towards the final publication of Tomb 26!