Fieldwork continued mainly in the northern part of SAV1E. 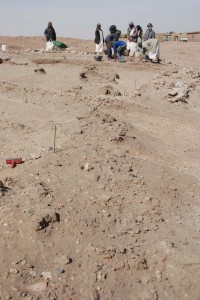 We were able to trace already first remains of the eastern wall of Building A which thus definitely continues towards the North.

At this very northern end of our excavation area, just below the surface, a small clay object with two perforations was found today. SAV1E 119 measures 5.8 cm in length and has a height of 2.3 cm. Such objects, resembling axe-heads in clay, have been found in quite large number and in varying sizes at SAV1N, in the northern part of the Pharaonic town of Sai Island. Close parallels from the Egyptian town at Elephantine allow us to interpret them as net weights for fishing (see von Pilgrim 1996). Although this identification remains tentative, it is from our point of view the most likely classification of such objects. However, they might have been used as weights for several purposes (see Giddy 1999 for objects from Memphis/Kom Rabia).

SAV1E 119 is a rather small and thus light example of this type of weighing-down device. But all in all, SAV1E 119 adds to our assessment of the material culture in the Egyptian town on Sai Island – it falls into the category of objects well known from New Kingdom sites in Egypt and probably testifies fishing activity during the 18th Dynasty on Sai.