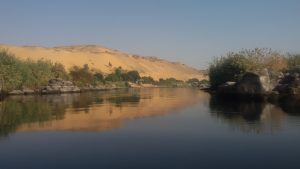 Week 4 at Elephantine just flew by – probably because of all the big shocking world news, including the very sad loss of one born with a truly golden voice…

Gold and golden are good keywords for one interesting observation during this week. Please note: Other than quite often assumed, Egyptologists are NOT hunting for gold – finding gold during excavations in Egypt and Sudan happens of course sometimes, but fortunately not on a daily basis!

This week, among the usual unspectacular, but very significant, finds like pottery vessels, re-cut sherds, net weights, stone tools, jar stoppers and thousands of broken pottery sherds, a very interesting, glittering sherd caught my attention. It might look not too spectacular for most of you, but it really is something very special! 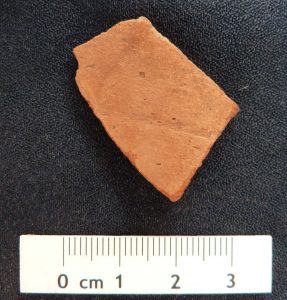 This small fragment (3.1x3cm) of a thin-walled jar with flaring rim made in a very fine Nile B2 was found in material below the foundations of House 55. It is covered with a micaceaous slip on both sides, giving the sherd a “golden” appearance. It really glitters in the sun with all the mica contained in its surface slip! Sherds like this are well known – but not from Egypt, but from further South: Kush, the land of gold. Our recently discovered fragment represents the so-called “gilded ware” produced in the Second Cataract forts, recently re-studied by Christian Knoblauch (Knoblauch 2011). This rare, wheel-made Nile clay ware was obviously locally produced in Lower Nubia during the late Middle Kingdom and the Second Intermediate Period. Thus, even if it is a residual piece and has nothing to do with the actual phases of use of House 55 we are focusing on, the “golden” sherd is of interest for general connections between Elephantine and Nubia.

Knoblauch 2011 = Christian Knoblauch, Not all that glitters: a case study of regional aspects of Egyptian Middle Kingdom pottery production in Lower Nubia and the second cataract, in: Cahiers de la céramique égyptienne 9, 2011, 167‒183.