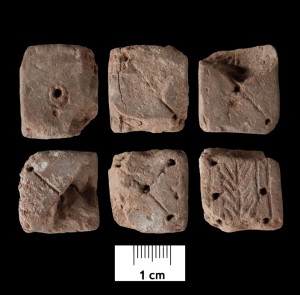 In a season with many excellent finds, this beautifully crafted six-sided dice (SAV1E 2771) stands out as one of the best. The dice is well preserved and missing only a small piece of the corner between faces three and four. In addition to the standard dots (pips), each number received further decoration: a circle around the one, incised lines connecting the dots of two through five, and a fern pattern filling the face of six. Though the popular game of senet used stick die as early as the Predynastic Period, the six-sided dice did not reach Egypt until much later than our New Kingdom focus. Nonetheless, the detailed and artistic production of this example from SAV1 East makes it a highlight of the 2016 season.