Work is progressing very well in tomb 26 this week. Martin Fera regularly documents our present state of work using a structure from motion application, saving us much time in producing highly accurate 3D surface models of the complete chamber as well as of detailed situations.

One of the interesting new finds in the burial chamber is that more complete vessels were partly unearthed in the southwestern chamber. I was especially delighted that one of them, when further cleaned today, shows clear signs of a “ritual killing”! An intentional perforation is visible on its junction of the neck to the body. 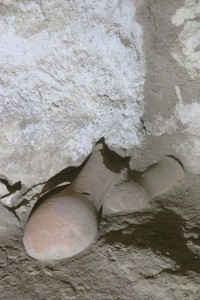 The vessel is a very nice tall-necked red-washed bottle and most Egyptologists will probably now think of the famous “Breaking of the Red Pots”. This Egyptian ritual is attested since the Old Kingdom (Pyramid Texts) and there has been the tendency to associate every ritual that involved the smashing of pottery vessels with the “Breaking of the Red Pots” (cf. Seiler 2005, 178; Budka 2014). Recently the awareness increased that pots with killing holes appear within Egyptian and also Nubian contexts over a very long time span and should be separated from the “Breaking of the Red Pots”. Like in other cultures, there are a number of different pot breaking rituals embedded in the funerary sphere in ancient Egypt and Sudan – they are especially common in the 2nd and 1st millennium BC and there is no universal interpretation for all of these broken or perforated vessels.

We have to be patient whether any clues why and when the vessel in tomb 26 was intentionally perforated come up during the course of exposing it and its context further – for now I would simply call it a killed pot, probably to render the vessel “useless”, but with the awareness that other explanations are possible.

Apart from our “killed” vessel, Marlies and Andrea are finding more and more fragments of new individuals while working on the fragile human remains. This rich and quite complex situation in the burial chamber of tomb 26 will keep us busy in the next weeks! 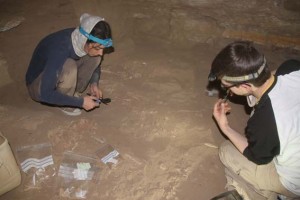 Budka 2014: Julia Budka, Egyptian impact on pot-breaking ceremonies at Kurru? A re-examination, in The Fourth Cataract and Beyond. Proceedings of the 12th International Conference for Nubian Studies, ed. by Julie R. Anderson & Derek A. Welsby, British Museum Publications on Egypt and Sudan 1, Leuven 2014, 641–654.